The Anthropocene - reflections on a concept, part I

The idea that we now inhabit the 'Anthropocene' has really taken off. Even though I had to teach the word to my web browser's in-built dictionary in writing that last sentence, a Google search for 'Anthropocene' yields over half a million results. There is now an academic journal bearing the name, numerous research programmes take the idea as a starting point, and an increasing number of events and conferences are using the idea to stage interdisciplinary exchange between physical and social scientists (see for example the forthcoming conference in Bristol on 'Society in the Anthropocene', and the ongoing project in Germany led by the Haus der Kulturen der Welt).

The notion that the widespread impacts of human activities on the environment have led us into a new geological era was first formulated by ecologist Eugene Stoermer and atmospheric chemist Paul Crutzen. For them, human activities are having such a profound effect on the functioning of the earth's natural systems that changes are occurring at a pace which is unprecedented in geological history.

In this post, I want to explore a little of the relevance of the concept 'Anthropocene' to our understandings of  how knowledge and politics, and nature and culture, are related to each other. In a later post, Helen will offer some reflections on the deliberative openings which the concept offers. The Anthropocene is already becoming a site of exciting interdisciplinary conversations. Here, I will reflect a little on what scholars in science and technology studies (STS) and geography might have to contribute to these debates.


Knowledge in the Anthropocene

Bruno Latour - one of the 'charismatic mega-fauna'  of STS as I once heard him described - has been quick to seize on the significance of the Anthropocene. In many ways, the recognition and labeling of humanity's deep entanglement with 'nature' represents a vindication of the argument put forward by Latour in his 1993 book We Have Never Been Modern. Here, he argues that the modernist 'constitution' rests on an ontological and metaphysical distinction between nature and culture, despite the profusion of hybrid, networked entities which span and muddle the boundary. Binary distinctions between the natural and the social, between object and subject, and between fact and value are, for Latour, forms of collective delusion. In his later works such as Politics of Nature, Latour argues that solutions to the ecological crisis depend on abandoning our modernist binary pretensions and embracing the hybridity of the world. In the 'Parliament of Things', objects like the climate, the economy and equitable development would be debated alongside each other as collective 'matters of concern'.

In a recent piece in Social Studies of Science, Latour gestures at the ontological vindication offered by the Earth System Scientists to those who argued that hybrid sociotechnical networks were "the ones to follow":


For Latour, the "new world" of the Anthropocene represents a profound ontological shift in human understandings of connection and entangling with the nonhuman. The "arrow of time" (as he argues here) no longer points towards emancipation from the bounds of nature through the purification of "matters of fact", but rather towards "more and more entangled matters of concern" (see also his recent Gifford Lectures on "natural religion"). The Anthropocene, on this reading, is a vindication of Latourian realism.

Sheila Jasanoff, another of STS's thought-leaders, might offer a different reading of the Anthropocene. Jasanoff is more committed to the field's constructivist epistemologies than Latour (who, with echoes of Thomas Kuhn's disavowal of the sociology of science, has recently pondered whether he was wrong to contribute to the development of the kind of constructivist accounts of science which would become cannon fodder in the 1990's "science wars"). But Jasanoff is no social determinist. Rather, through the notion of co-production, she seeks to understand how knowledge and forms of social order evolve together. One does not linearly determine the other. Rather, the ways in which we seek to know the world are intimately bound-up with the ways in which we choose to live in it.

So the deconstruction of the modernist constitution here is less about the material reality of connections between nature and culture, and more about the deep cultural connections between how we know and how we live. In this vein, Jasanoff has recently been exploring a different understanding of 'constitution'. Drawing on legal scholarship, Jasanoff offers a notion of constitution which speaks of the evolving modalities of power between state, science, citizens and law. The emergence of technologies like genetic profiling represent challenges to established ideas of self, citizenship, consumption and collective life, while re-ordering the nexus of knowledge and power. Thus the "genetic age" represents something of a "constitutional moment" where rights, powers and responsibilities are openly or (more often) tacitly re-negotiated.

Maybe the emergence of the Anthropocene concept can be read as a constitutional moment in the constellation of powers. The concept is in many ways the logical conclusion of the epistemic globalism which, Jasanoff has argued, emerged at the confluence of simulation modelling, an iconography of a fragile, holistic Earth, and an enthusiasm for political trans-nationalism in the wake of the collapse of the Soviet Union. If political imaginations evolve in tandem with cognitive developments, what modes of living and governing does the Anthropocene offer to us?

The phrase 'Earth System Governance' has come to be closely allied with the Anthropocene (see here for example); the idea of a unitary earth system offers a newly governable object, just like the emergence of the climate as a global entity opened new spaces for trans-national political initiatives guided by dominant governmentalities (see e.g. here and here). Related ideas like 'planetary boundaries' have been described as offering the hard-wiring for a new global managerialism. One such governmental response to these new knowledges might be geoengineering (the deliberate modification of the atmosphere) - an idea which Paul Crutzen was again fairly influential in promoting. I've often heard debates about geoengineering framed as questions of ontological categorisation: 'if we've already inadvertently altered the climate this much, why are we so afraid of deliberately altering it?' is a common line of argument. New conceptions of the relationship between human and natural agency thus feed into deeply political (and contentious) debates about the use of technologies like stratospheric aerosol injection in attempts to mitigate climate change.


Melissa Leach, writing in the Huffington Post, asks the question of whether the politics of the Anthropocene pose challenges to democratic norms. In its reification of scientific authority, its hierarchy of relations between the human and the nonhuman, and its reliance on seemingly indisputable scientific facts, Anthropocene discourse seems to challenge democratic notions of deliberation, legitimacy and norms of expert advice. Leach offers an empirical example from a recent UN meeting of political options being 'closed-down' in the translation of Anthropocene science into policy advice. The potential depoliticization of human development and human-environment relations represents for Roger Pielke Jr. a "power grab" by a new community of planetary boundary-makers (for a rebuttal to Pielke Jr. by Victor Galaz, see here).

Approaches drawn from STS (with a little Foucault to boot) can draw attention to the work that a concept like the Anthropocene does for/to us. As Mike Hulme has often argued in the context of climate change, our focus should not be on finding elegant solutions to artificially neat problems, but on recognising how the idea and material reality of something like climate change (or the Anthropocene) invites us to look again at our social relations and at the ways in which power is distributed throughout society. In challenging what might be taken for granted (e.g. the idea that geoengineering would be the most "pragmatic" way to "manage" the Anthropocene), STS approaches can reveal how certain normative orders are constructed and thus point out that there may be alternative ways of thinking and acting.

However, the Anthropocene is by no means yet taken for granted. It is yet to be recognised as an official geological era, and it has been critiqued from various angles. For example, the 'anthro-' of Anthropocene is seen by some as obscuring the vast inequalities of responsibility for the current environmental crisis (see here). The recognition that humans - as a homogeneous mass - are now the key drivers of change overlooks the fact that it is certain humans and certain ways of living which have the most significant impacts. In this vein, Derrick Jensen in the Earth Island Journal argues that the Anthropocene idea is the product of the same narcissistic imagination which lies at the root of our current environmental woes. 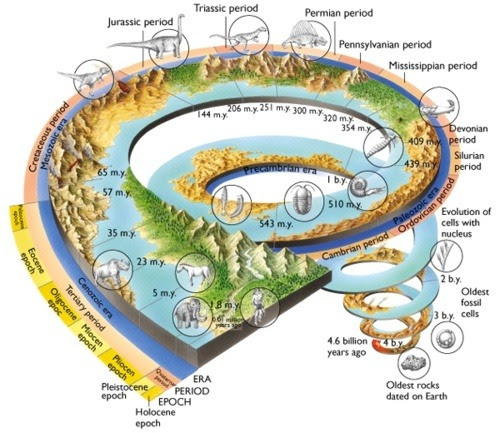 We might also investigate the '-cene' of Anthropocene. The concept is in part a historiographical project to re-order our understanding of the progression of geologic time. Does this focus on periodicity again obscure some geographical imbalances - perhaps in the spatial distribution of the impacts of environmental change? And does the insistence on novelty pose a risk of losing sight of existing and perhaps un-codified knowledges of human-environment interactions? As STS studies have shown, acts of categorisation are profoundly political and can induce silences and blind-spots as well as insight and elucidation. The deliberations over the veracity of the Anthropocene as a geological era will be of great interest to future historians not just of the earth sciences, but of categorisation and classification, and of modern societies' efforts to comprehend the largely unforeseeable outcomes of their 'achievements'.

Investigating the work that a concept like the Anthropocene does should keep social scientists busy for a long time to come. Beyond ontological grand-standing, a focus on how the production of such undeniably radical ideas impacts upon our cultures, politics and subjectivities arguably represents an important task for geographers and STS scholars to embrace. Maybe we're witnessing a constitutional moment in the balance of epistemic and political powers. Great attentiveness will be required to make sense of these re-orderings.