I've recently been wrapping up some work on the history of meteorology and climatology in the British Empire, funded by the Royal Geographical Society (with the Institute of British Geographers; RGS-IBG). The final project report which has been submitted to RGS-IBG can be downloaded here. A summary of the report is below: 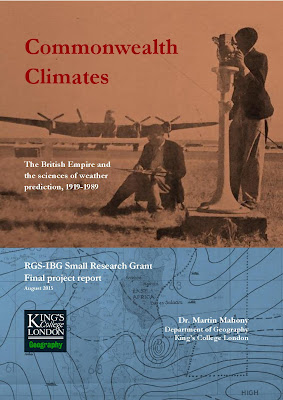 What effects did the political structures of the British Empire and the Commonwealth have on the emergence and spread of meteorological science globally during the 20th century? How did the development of such global sciences function as legitimating tools in arguments for continued colonial rule? Such questions arise from a growing body of scholarship on the historical geographies of colonial science, and were addressed in this project through archival research on the Conference of Empire Meteorologists (CEM) and the later Conference of Commonwealth Meteorologists (CCM). From 1919 these networks provided a space for knowledge exchange and for scientific standardisation, and offered their imperial backers a science of the atmosphere which could contribute to the improvement of transport and commerce across the British Empire. By tracing the priorities and achievements of these networks from the age of imperial consolidation, through decolonisation and the emergence of the Commonwealth, it has been possible to explore how international meteorological and climatological practices have evolved alongside shifting forms of colonial and postcolonial power. By focusing attention on sites and time periods heretofore neglected in the history of meteorology, this project makes important contributions to debates about the historical geographies of science and empire.

It's been a very productive project, with a number of resulting conference papers and a piece which I'm currently revising for the Journal of Historical Geography. The project also gave me the space to develop much more ambitious plans, which have resulted in me being awarded a British Academy Post-Doctoral Fellowship and a Nottingham Research Fellowship to pursue related topics in the School of Geography at the University of Nottingham. I'll be heading up there in December.

Posted by Martin Mahony at 07:55 No comments: