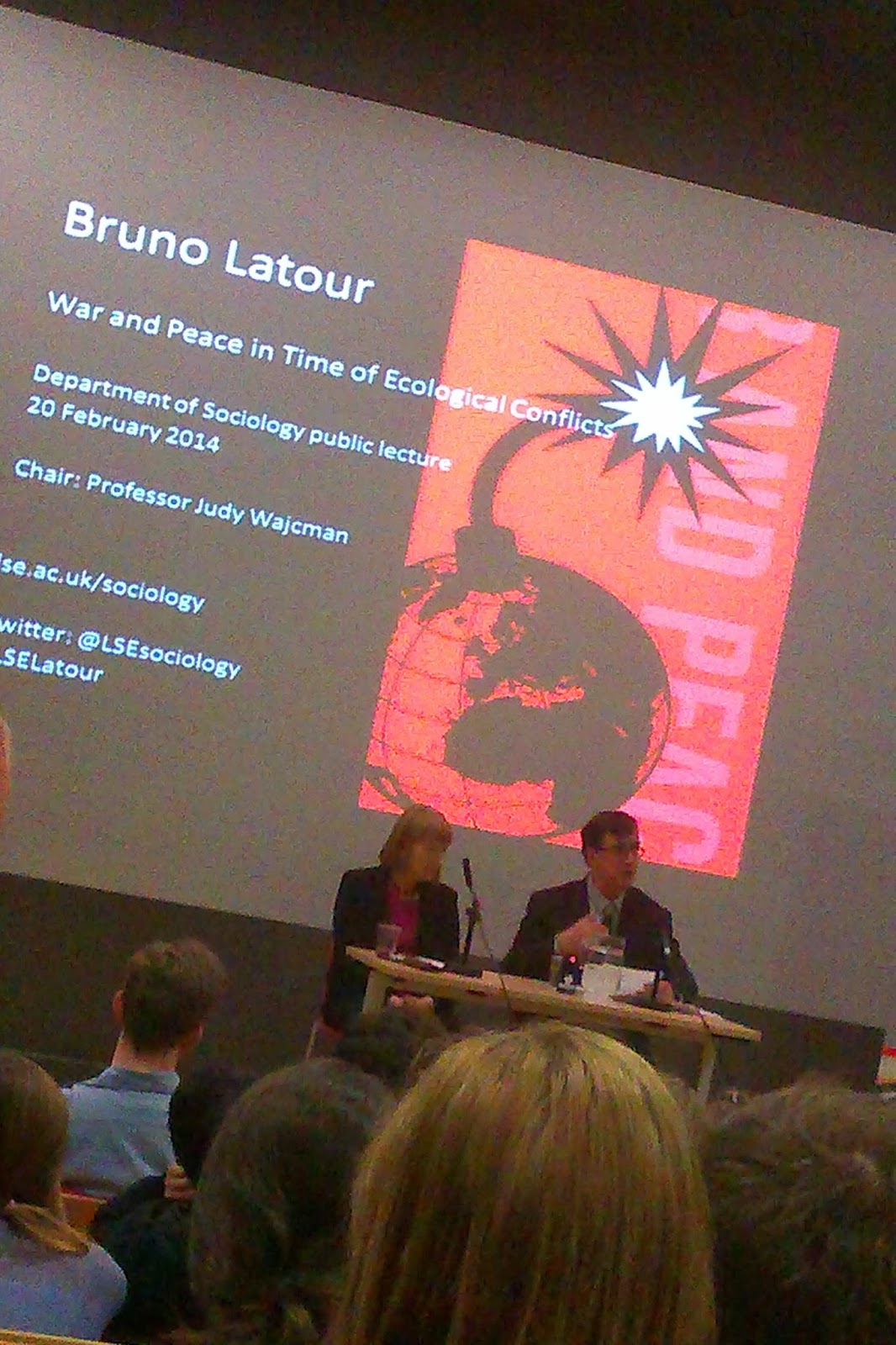 Bruno Latour delivered a lecture at the London School of Economics last night in which he outlined some of his recent thinking on the relationship between science and politics in a time of accelerating environmental change and policy stagnation.

Latour has cut an interesting figure in the climate debate in recent years. A key target of attacks against ‘relativism’ and irrationality in the 1990s ‘Science Wars’, he has since speculated as to whether the insights of science studies concerning the social constitution of scientific knowledge have inadvertently contributed to the ‘artificial extension’ of the debate over the reality and severity of anthropogenic climate change. More recently, Latour has sought to cast himself as an ally of the climate scientists and the activists who seek a political solution to climate change. He even related last night how climate scientists, in France at least, have even started to seek out his advice on how to conduct a ‘debate’ against a well-funded, smartly coordinated campaign to sow doubt and ignorance about the causes and consequences of climate change.


To hear him speak last night was, then, an interesting opportunity to hear his thoughts on what science studies scholars might contribute to the politics of climate. His offering, which he has largely outlined elsewhere (see here and here) and relates closely to his most recent book, is not straightforward. In true Latourian style, it calls for a fundamental re-orientation of one of modernity’s most fundamental tenets.

Latour has always enjoyed military metaphors. For him, the persistence of a spurious climate debate between two sides is rendered possible not by an assault of the forces of irrationality on the politically agnostic territory of science, but by a split between two different camps – those who cling to the idea of a sharp distinction between science and politics, facts and values, and those who value a new ‘political epistemology’ which recognises the interdependency of science and politics in the ongoing rational and democratic ordering of a common world. The climate warriors, of both stripes, are perhaps united only by their preference for the modern ideal of facts amputated from values. This is the settlement of the moderns, of the Holocene. The repertoire of ‘science versus politics’ – of policy dependent on scientific certainty, of a perfectly linear relation between knowledge and action – is what is to blame for questions of physical causation and probability becoming political battlefields. Science can legitimate the claims of policy advocates, while the inevitable uncertainties and complexities of the climate render climatology an easy target for those who recognise or believe that attacking the epistemic can short-circuit the struggle over the normative.

Latour thus called for a ‘science with politics’. He argued that climate scientists have been forced, by the institution of Science, to fight the deniers with one arm tied behind their backs as they shelter behind the Maginot Line of epistemology, which pluckily yet hopelessly separates is from ought. What if they could respond to charges that the IPCC is a ‘lobby’ by saying ‘yes, it is a lobby. A lobby for what kind of agents must be taken into account in political discussions of how we want to re-make the common world. You [the accuser] are a lobby too. How about showing us exactly what it is that you would like to see retained or remade in the common world?’ The cry is for ‘cards on the table’ – an argument along similar lines to that of Mike Hulme in his book Why We Disagree About Climate Change. Climate change is about the very relations we have with other humans and the material world which surrounds us. It can only be both scientific and political. Separating the one from the other weakens both. Countering the power of the oil-funded lobbies means recognising that we’re all a lobby for a particular kind of world-in-the-making.

Latour ended with some interesting reflections on the politics of the Anthropocene and the transformations of space and time wrought by the re-cognition of the Earth and of the need for a grounded politics of the geo. This connects with recent arguments in critical human geography for a re-visiting of the geo of geopolitics (e.g. here). He riffed for a while on the recent blockbuster Gravity, which for him represents the crumbling of modern utopianism (in the form of crumbling space stations) and the gravitational pull of a metaphysics of earthliness, of home or Gaia, of re-worked horizons and of the sand between Sandra Bullock’s fingertips in the closing scene. He quipped that the rarefied environment of outer-space is perhaps the only place where the ideal of scientific distance and detachment has worked according to plan, as a few carefully selected individuals strained against the pull of an earth which now surrounds and enfolds. The resonances with Peter Sloterdijk are striking.
Some may find Latour’s call for a new political epistemology, even a new metaphysics, either unhelpfully vague, impractical, or downright dangerous. Ceding the territory of hermetic rationality to ‘science-with-politics’ may, in some eyes, risk poisoning the ideological well of climate politics even further. But for me, it gets at the need for climate policy advocates to stop worrying quite so much about the ‘sceptics’. The sceptics are right that climatic certainty is elusive. But they are wrong that that should mean that climate politics is impossible. The phenomenon of climate scepticism, at least in its most nakedly ideological and orchestrated form, is, for me, the result of a bad settlement between climate science and politics, not a cause of it. Latour’s suggestive argument, while characteristically inattentive to the specificities and complexities of climate politics, is a helpful way to start thinking how we might reorganise the relationship between scientific knowledge and political action. Although I find the ‘cards on the table’ argument itself a little utopian in its Habermasian appeal about ideological clarity, there is something important here about embracing, without fear of irrationalism, the politics of the climate. Scientific knowledge is vital to such debates about the material complexities of the Anthropocene, but the claustrophobia of this posited geologic epoch demands recognition of the false and ultimately unhelpful distance constructed between modern science and politics.

P.S. LSE are following-up this event with a talk next Thursday by similarly prominent German sociologist Ulrich Beck.
Posted by Martin Mahony at 02:34