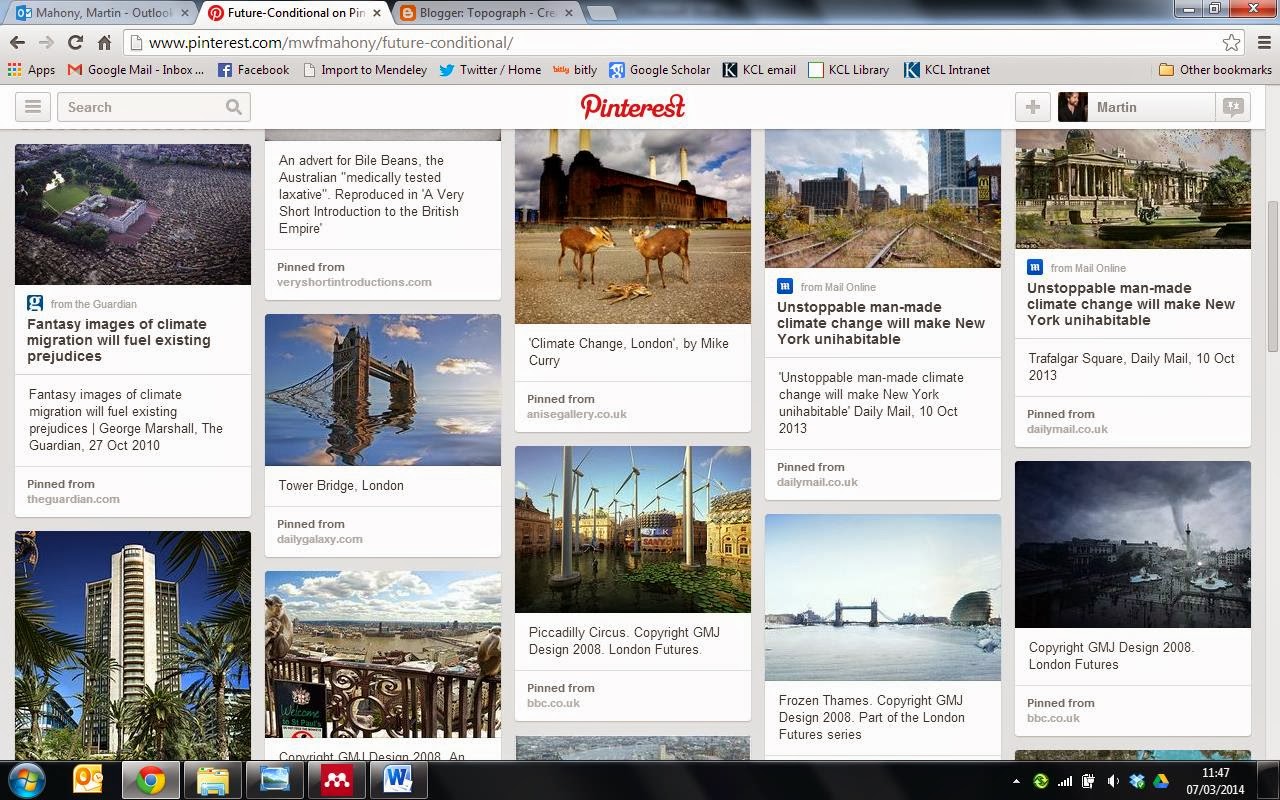 I've recently been developing an interest in how speculative futures are visualised, particularly regarding the relationships between climate change and urban change. I came to this topic through my participation in a workshop on climate-induced migration discourses at the University of Bremen, the proceedings of which will soon be published as a collective, extended working paper. I spoke about the 'Postcards from the Future' project which used digital photographic montage techniques to create images of a future London ravaged by ice, heat, water and - in quite regrettable ways - human migrants.

The images got me thinking about the nature and political aesthetics of montage. As Marcus Doel and David Clarke argue in a 2007 paper, montage is a pervasive epistemic and aesthetic practice, which "produces and exceeds matters of fact. In each and every domain, that which is given is given through an assemblage of views, an assemblage whose cuts ensure that what is given remains open". I'm particularly interested in how the 'assemblage of views' brings together distant places in a kind of spatial juxtaposition, for example in images of paddy fields in Parliament Square or shanty houses crowding around Buckingham Palace. It strikes me as interesting how certain visualisations of climatic futures claim to reach though time by reaching across space, thus revealing particular geographical imaginations about the nature of social change, about human-environment relationships, and about forms of alterity and difference.

To further explore this genre of future-conditional imagery (if x, then y...) I've start a Pinterest 'pin-board' to collect together some example (see here). So far these range from the 'Postcards' mentioned above to advertising images, maps of potential flood levels, screen shots from films, and a few historical examples of images of imagined futures or of transported spaces. It's this historical collection which I'm most interested in developing, in order to provide some cultural-historical context for the current proliferation of images of urban destruction, social transformation and environmental decline.
I'm hoping that the Pinterest board will eventually become a 'population sample' on which I can base a written analysis. I'm currently reading Peter Sloterdijk's 'In the World Interior of Capital' and there are some striking resonances between this genre of image and his ideas about the political anthropology of globalisation, about representations of distant spaces in the 'interior' world of capitalism, and about the exclusions and partitions that define the political and representational economy of contemporary forms of order.

So if you come across any images which fit with all of this, let me know!
Posted by Martin Mahony at 03:55